Prehistoric Bugs From Time Of Dinosaurs Found Frozen In Amber 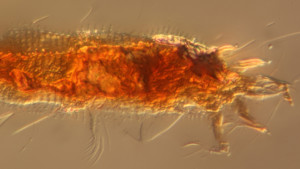 Scientists said Monday they have found three well-preserved ancient insects frozen in amber — and time — in what is Earth’s oldest bug trap.
The discoveries in Italy may sound like something out of “Jurassic Park,” but these bugs are even older than that. They are about 230 million years old, which puts them in the Triassic time period, and about 100 million years older than what had been the previously known oldest insects trapped in amber, or fossilized tree resin.
Researchers painstakingly examined 70,000 droplets of amber found in northeastern Italy. Stuck in them were two microscopic mites and much of one fly. The mites are too small to be seen with the naked eye and the fly is a bit tinier than a fruit fly, researchers say.
The discovery was reported Monday in the Proceedings of the National Academy of Sciences.
While older insects have been found in rock fossils, these are different because they are not compressed and better preserved, said study lead author David Grimaldi, curator of the American Museum of Natural History in New York.
And you can see more detail, he said.

“That’s the great thing about amber. You can make this incredible detailed comparison with living species.” Grimaldi said.
When he compared the ancient mites to their modern-day descendants, he was surprised by how similar they are. Except for differences in the mouth and fewer legs, “they’re dead ringers for (modern) gall mites,” he said. The modern ones can be found in bubbles, or galls, on plant leaves.
And that’s surprising because the world has changed a lot from when these bugs were alive. Back then, there was only one giant continent, some early primitive dinosaurs and no flowering plants. Mites now live on flowering plants, but their ancient relatives must have stayed on trees, Grimaldi said.
Derek Briggs, director of the Yale Peabody Museum of Natural History and who wasn’t part of the research, called the bugs’ discovery tantalizing, saying it could help researchers further understand how life evolved on land.