Opossums look like giant rats, with pointed snouts and skinny, hairless tails. They are the only marsupial animal in North America, which means they are similar to kangaroos, by raising their young in a pouch. The term possum covers about 70 species of marsupials native to Australia. Opossum covers the over 100 species of marsupials living in the Western Hemisphere. Opossums are often referred to as possums, however they are two different groups of animals. Adult opossums average just 10-14 lbs. Opossums do not have a very long lifespan. Rarely do they live more than two years.  Mating during the colder months, the young then climb into the pouch and grow, then cling to the mother’s back. When old enough, the young will drop off and lead a life on their own. Opossums are nocturnal and omnivores, so they will eat just about anything. They have the most teeth of any mammal (50). 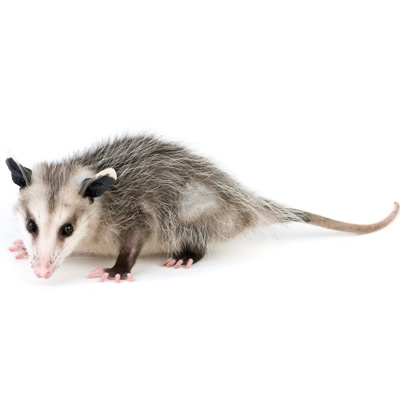 Opossums will sometimes establish a home base, especially a female with young.  Often their home base is your home base. They are not very fast, and will try stand their ground when threatened. In some circumstances, they will sometimes fake a death, or “play possum”.  They will fall over, tongue hanging out and act as though they dropped dead out of terror.  This is all an act.  Opossums can hang from their tails as well, but they very do this.

These animals are scavengers, they can come into contact with people and cause some issues. They will attempt to steal garbage and pet food when available. If a pet corners an Opossum, they will get aggressive and can bite.  They like to live in human structures and under sheds or decks, however a very common home for an Opossum is in an attic.  When an opossum moves into an attic, it makes the attic a mess by leaving a lot of droppings in your home. In addition, to the damage they can cause when alive, opossums will frequently die inside an attic or within a wall and the smell of a rotting opossum body is horrible.
Opossums can spread fleas and other parasites.  They do carry a large amount of parasites, and can cause diseases similar to those that fleas and ticks can transmit. The large amount of droppings they leave can pose additional health risks.
Call us now
800-525-4825
800-499-5866 (Cape)
603-888-2636 (NH)
Current Promotion
New Customer Deal
$25 off
any new one-time service*
Check it out!