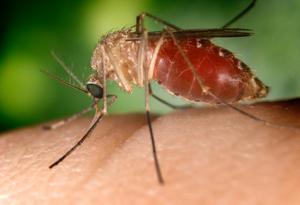 The Massachusetts Department of Public Health (DPH) on Friday, Aug. 31, announced West Nile virus (WNV) has been confirmed in three Middlesex County residents and one Hampden County resident. All four patients are recovering.

“Confirmation of these four cases is a timely reminder that people need to take the threat of mosquito-borne illness seriously no matter where they live,” said DPH state epidemiologist Dr. Al DeMaria. “Warm temperatures are forecast for Labor Day weekend, and it’s vitally important that people take steps to protect themselves against mosquito bites: use insect repellant, cover up, and avoid outdoor activities at dusk and after nightfall when mosquitoes are at their most active.”
As a result of the Middlesex County findings, the WNV threat level is being raised to “High” in Chelsea, Everett, Lexington, Malden, Medford, Melrose, Revere, Saugus and Winthrop. The threat level is being raised to “Moderate” in Bedford, Burlington, Lincoln, Stoneham, Wakefield, Winchester and Woburn.
Based on the Hampden County findings, the WNV threat level is being raised to “High” in Chicopee, and to “Moderate” in Holyoke, South Hadley and West Springfield.
WNV-infected mosquitoes have been found in 97 communities from nine counties so far during 2012, and health officials predict that the state is on track to have the greatest number of WNV-positive mosquito pools since WNV was first seen in Massachusetts in 2000. There have been four human cases of WNV in Massachusetts prior to this announcement – three in Middlesex County and one in Berkshire County.
While WNV can infect people of all ages, people over the age of 50 are at higher risk for severe disease. WNV is usually transmitted to humans through the bite of an infected mosquito. Most people infected with WNV will have no symptoms. When present, WNV symptoms tend to include fever and flu-like illness. In rare cases, more severe illness can occur.
If you live in a “Moderate” or “High” threat area contact A1-Exterminators to see what we can do to help keep the mosquito population down! Call us today at 1800-525-4825!