You can protect yourself against ticks 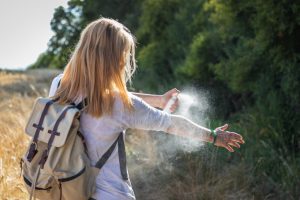 Know where the critters camp out. Ticks often reside on the foliage that borders meadows. Deer like to graze in the open grassy areas, says Dr. Krause, but also linger in the surrounding wooded outskirts so they can run away if a predator suddenly appears. As for the ticks? They’re just following the deer. When you’re in tick territory, tuck your jeans into your boots or socks, slap on an insecticide (it can work against ticks), or wear clothing that’s been treated with permethrin, an insect repellant. The CDC recommends people use an insect repellant that contains at least 20% DEET. You can treat your clothing with a product like Cutter’s Backwoods Insect Repellent Pump or find insect-repellent clothing from manufacturers like LL Bean or Rei.