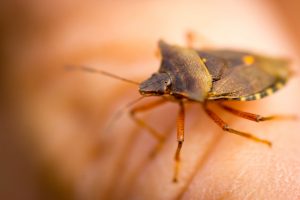 In general, adult stink bugs feed on fruits and nymphs feed on leaves, stems and fruit. The life cycle of brown marmorated stink bugs generally involves mating, reproducing and feeding from spring to late fall. Upon the onset of cold weather, stink bugs seek shelter to spend the winter in a dormant phase known as diapause.

Stink bugs search for overwintering sites in late fall before the weather conditions drastically change, leading them to seek out shelter in homes and other man-made buildings. They spend the winter hiding inside homes or buildings, usually in the walls, attic or crawl space. However, entering into diapause may not be the complete end to their season of activity. If the weather warms up for a long enough period of time, indoor overwintering stink bugs might be misled into thinking it is time to exit their diapause period and become active again. Stink bugs reemerge in early spring and become active. During warmer months, these pests can usually be found congregating on the sides of buildings.

Brown marmorated stink bugs mate and create up to 3 generations per year depending on their habitat. Cooler zones see one generation per year, while warmer areas are likely to see 2-3. Female stink bugs typically lay 20 to 30 eggs. Egg laying generally occurs from May through August. The eggs are light green, barrel-shaped, and are attached side-by-side on the underside of the host plant’s leaves in a mass. Eggs hatch four to five days later and the nymphs will begin to feed. They undergo a series of molts until they become adults by fall.