↓ Skip to Main Content
Home › Insects › Bees, Hornets & Wasps › Why are bees and wasps so bad this Fall?

Why are bees and wasps so bad this Fall?

Bees and wasps have been especially bad in recent years. It’s not just your neighborhood, it’s all over Massachusetts. But is the Bay State really seeing an increase in their numbers? Or, are they just further encroaching on humans as weather conditions become harsher?

Keep reading to find out…

Typically, bees, wasps, yellow jackets, and hornets make themselves most known when Summer turns to Fall and conditions become more trying. “Summer and early fall is when Massachusetts bees and wasps do their thing — and that thing might include stinging if they perceive a threat.” Although, experts at the Essex County Beekeepers Association are saying the ongoing drought has got them on edge all season. — Wicked Local

Are Bees & Wasps getting worse?

Many people are reporting more and more hives in their neighborhoods, but has the number of bee and wasp colonies in Massachusetts really gone up? Whether or not there are more bee and wasp populations is still to be determined. However, considering they’re so aggravated in a drought, people are reporting more close encounters with stinging insects encroaching on picnics, etc.

Stingers don’t go down without a fight.

Right now especially, yellow jacket removal is high in demand. “It’s typical at this time of year for yellowjackets to be much more aggressive,” Hamlin said. “But, even bees get more aggressive as the season goes on, because they have more to defend.” — Wicked Local

In the UMass Extension factsheet on yellow jackets, the late entomologist Robert Childs wrote, “For most of the year, they are considered beneficial in that they feed on caterpillars and nuisance flies. However, in late summer they change their diet from these high protein foods to those high in sugar, which explains why they are attracted to over-ripe fruit, sugary beverages, and greasy foods.” — UMass Amherst 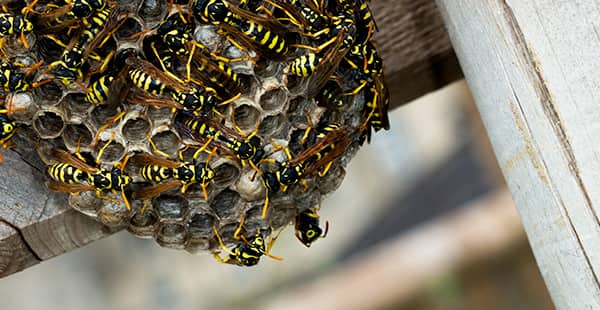 So, on top of your expected seasonal last-hurrah from nesting colonies, ongoing droughts are making for even-angrier yellow jackets, wasps, hornets, and even bees this Fall.

“Honeybees are particularly active this summer because of the drought. In the drought, they’re having it rough — and that can make them edgy as they prepare for the coming winter.” — Our Community Now

Q: What makes bees and other stinging insects become more aggressive in the Fall?

A: Dry weather makes for scarcer nectar and pollen.

“We went through a period of such dry, dry weather, so the nectar and the pollen was not readily available for them,” said Kathy Balestrier, vice president of Essex County Beekeepers Association. “So they were out and about more just trying to find resources to bring back to the hive.” — Wicked Local

“Because it’s been so dry lately, they are nesting in the bushes, where there are some berries, and some moisture,” Kuong said. 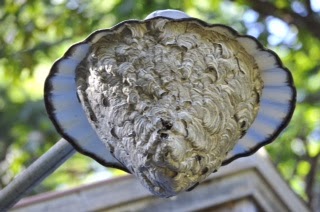 Nests in your neck of the woods? Strike before they sting.