↓ Skip to Main Content
Home › A1 Exterminator Services › Yellow Jackets, Wasps, and Hornets | What’s all the buzz about?

Yellow Jackets, Wasps, and Hornets | What’s all the buzz about?

How to tell the difference between Yellow Jackets, Wasps, and Hornets 🤔🐝🐝🐝⬇️ 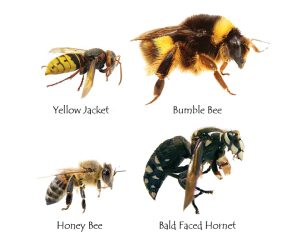 Quick lesson: all hornets are wasps, but not all wasps are hornets. It’s difficult to distinguish the differences — especially when you’re trying not to get stung — but there are three common wasps that can be identified by looking at their nests, and how they overwinter. – New Hampshire NPR (NHPR)

🐝 Paper Wasps are about 1” long, have long legs, and range in color. They can be reddish-orange to black, sometimes with yellow highlights. They build umbrella-shaped nests that are often suspended from eaves or window casings. When they fly, their long legs dangle.

🐝 Bald-faced Hornets are about ¾” long with black bodies and gray bands. They have brown bodies with yellow stripes. Hornets have massive, enclosed nests that hang from sturdy perches like tree branches.

🐝 Yellow Jackets are the smallest at ½” in length. They can be mistaken for honey bees because of the yellow markings on their bodies. Yellow jacket nests are enclosed like hornets nests are, but yellowjacket nests are found belowground. When they fly, yellow jackets tuck their legs into their body. 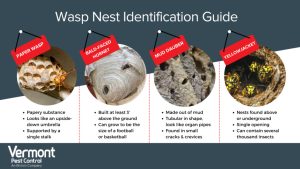 Are Wasps and Yellow Jackets dangerous?

As far as stinging insects go, Paper Wasps are quite docile and will sting only if they feel threatened. Yellow Jackets, on the other hand, are formidable pests and should be approached with caution. These insects will repeatedly sting for almost no reason at all!

A woman on Cape Cod, Massachusetts was stung over a dozen times by her new unwelcomed neighbors. Melissa Harris of Sandwich has lived in her home for over 15 years and frequently walked her dog around the neighborhood without incident. Then, last summer – not one, not two, but three telltale gray paper nests set up shop around her home.

Out for a walk one day, hornets “chased her and her dog from the back to the front yard. One insect, in particular, seemed determined to burrow into her leg, Harris said. “I was trying to brush them off. All the things you do by instinct (are actions) that you shouldn’t do.”

Are Yellow Jackets getting worse in Massachusetts?

Lately, it seems like Yellow Jackets are ‘coming in swarms’, but some Bay State areas are getting the brunt of it.

Increasingly every Autumn, Cape Cod is getting overrun by wasps and hornets.

“The warmer winters are creating a situation that allows these populations to grow year-round rather than seasonally,” he said.

Earlier manifestations of spring weather allow the populations of stinging insects to emerge sooner and get bigger over the summer, Travers said.

“This time of year, the populations are at their maximum size of workers. As the summer wanes, they run out of insect prey. They are real agitated.”

How do I get rid of Yellow Jackets?

🐝 Click here to get $25 off our Residential Pest Control 🐝

“Yellow Jacket extermination is a dangerous process, and shouldn’t be attempted without the aid of professional hornet and wasp exterminators.” – Best Pest Control Boston

Most of the DIY remedies suggest that homeowners get in close contact with the yellow jacket nests to spray or dump the solution into the nest, however, this can be extremely dangerous. Not only is it dangerous to spray anything into a yellow jacket’s nest but more than likely that spray won’t work.

“Most pesticides available to the public are repellents, the aerosols that spray from afar are often the most repellent and the ones most likely pushed for stinging insects, that way the homeowner avoids the stings. The side effect of that is when you treat an entrance hole, the [hornets] may try to find another way out. If they are nesting in a wall void or soffit area, the other way is often inside the house!”

Learn more about how A1 Exterminators treat stinging insects. 🐝