‘Splooting’ is the new planking but for Squirrels 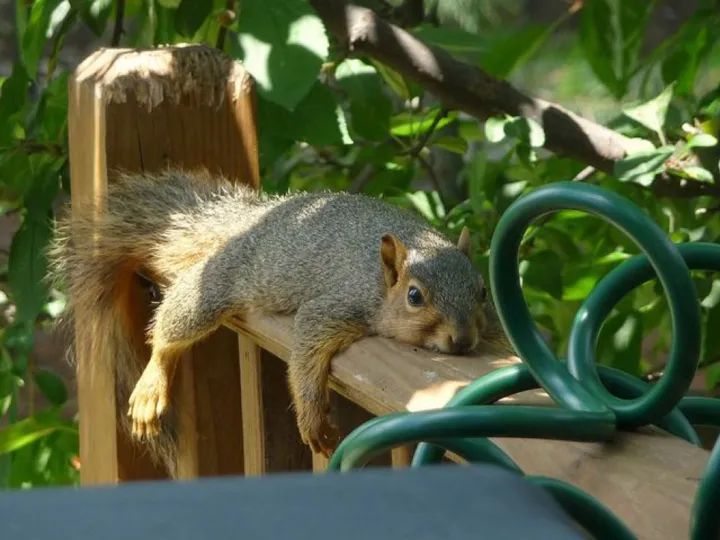 ‘Splooting’ is all the rage this heatwave season. Squirrels are leading the trend; this controversial way of lying down is leading to animal control hotlines ringing off the hook. But just with planking, there is an air of concern surrounding splooting. Are these squirrels okay? Why are they splooting? Is there something we should be doing to help them?

Find out all these questions and more below…

What is splooting and why are squirrels doing it? 🤔🐿️

“If you looked out your front window and saw a squirrel stretched out spread-eagle and motionless on your lawn, you’d likely think it met some untimely end. Really, though, it’s probably just splooting.”

Alison Hermance of WildCare in San Rafael said that amid sweltering temperatures, the wildlife hospital’s hotline has “been receiving lots of calls about hot animals, including concerns about squirrels spread out flat.” – Mercury News

Splooting is a reaction to extreme heat. 🐿️

“If you’ve got a fur coat and you’re stuck in 107-degree weather, you don’t have a lot of options to cool down. For squirrels and other furry mammals, splooting is one of them.” – The Daily Beast

To sploot, squirrels stretch themselves out on the ground and remain completely motionless. Their goal is to get as much of their surface area in contact with the ground as possible. This helps to dump heat from their bodies into the environment, cooling them down. Splooting is also sometimes called “heat dumping.” 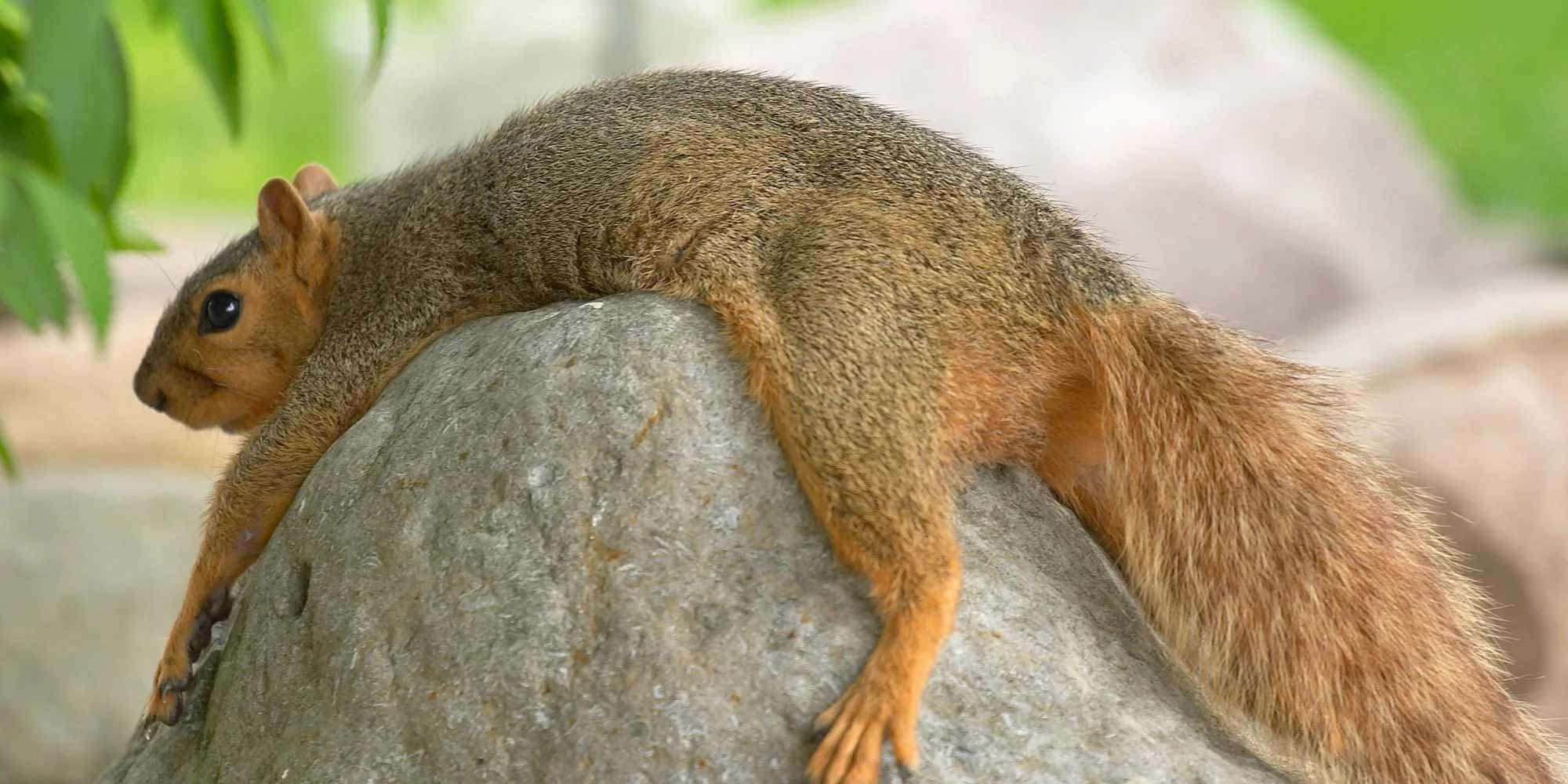 “It turns out that splooting is a normal and natural behavior. Squirrels do it, and so do creatures like bears and even dogs.” Normally, mammals can sweat or pant to cool off but if they’re dehydrated they can’t do that.

“Think about a time you’ve stretched out on the tile floor of your bathroom on a hot day, or put your hand on a chilly marble cutting board. Splooting squirrels are doing the same thing, but with their entire tiny bodies.”– Yahoo! News

What to do if you see an animal splooting

When Jennifer Modenessi of the Lindsay Wildlife Experience in Walnut Creek first saw a squirrel smashing its body into the pavement in front of the museum’s facility, she says, “I didn’t know splooting was a thing, and I thought something was wrong with it.” – SFGate 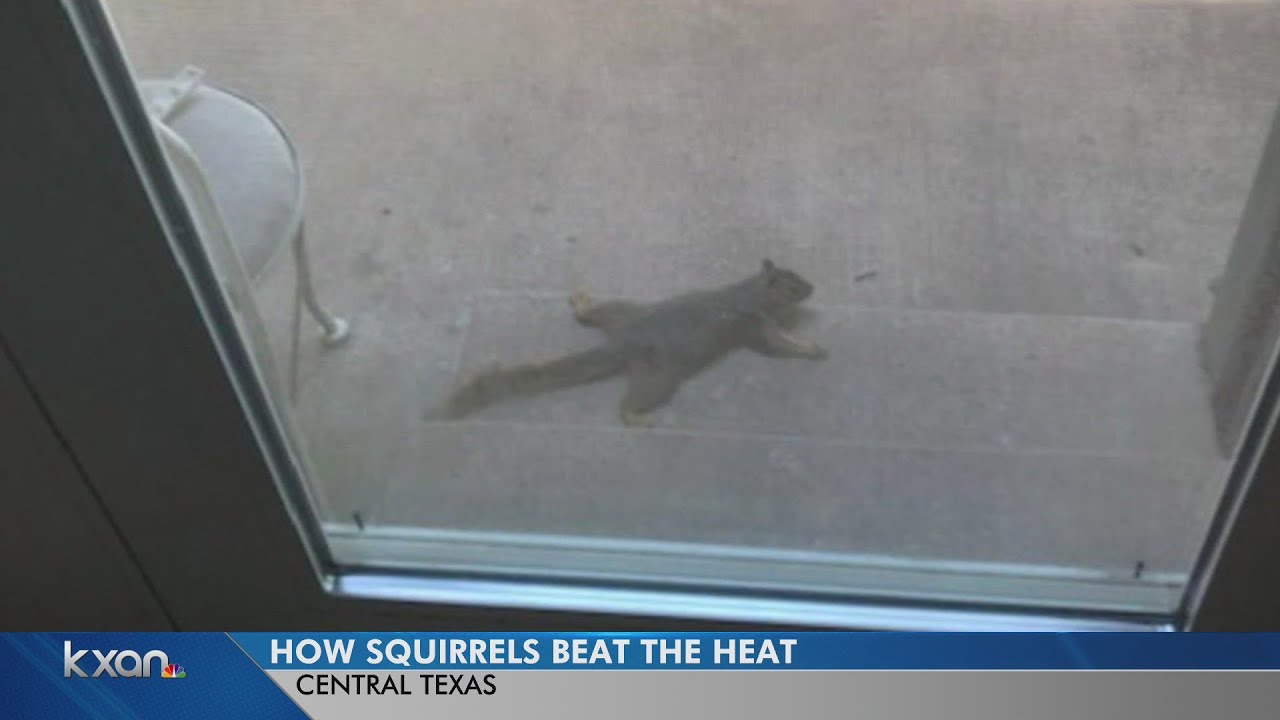 Q: “What should you do if you see a splooting squirrel?” 🐿️

Authorities say splooting is fine for these little guys, and there’s no need to do anything other than let them work their adorable thermoregulatory magic. (And perhaps make a TikTok.)” – SFGate 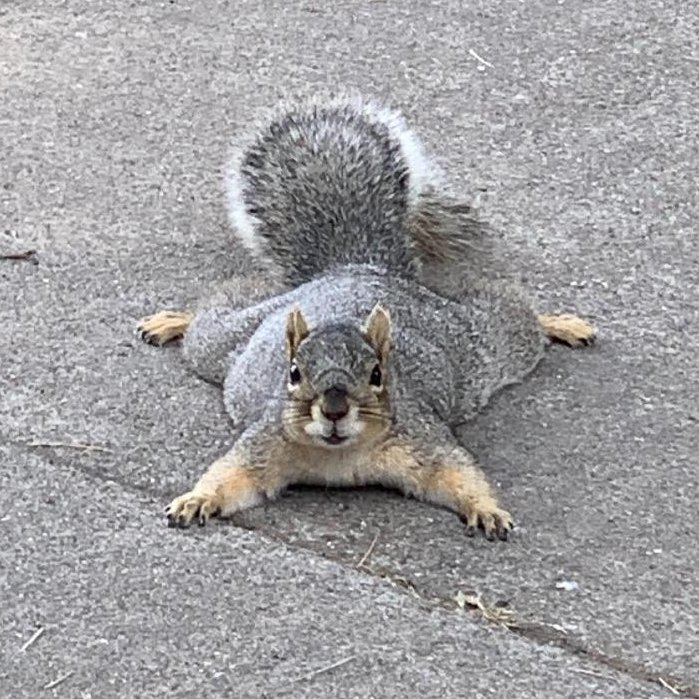 Why Do Squirrels Squawk in Trees?

Not-so-Cute: Baby Squirrels are Falling out of Trees in Extreme Heat

“They’re literally jumping from their nests to escape the heat,” said Buffy Martin Tarbox of the Peninsula Humane Society. From The Mercury News

Calling it a “squirrel-palooza,” Bay Area wildlife rescue groups report a surge of distressed animals and are mobilizing teams to rescue the rodents with ice packs, fluids, medications and special diets.

“Every species is just doing its thing, and then you get [a heat wave] like this,” he said. “Some will be in the wrong place at the wrong time.” – The Mercury News

A litter of squirrels was rescued from an abandoned nest at a park in Waltham, Massachusetts, police said.

Footage released by the Walton Police Department on August 26 shows one of the baby squirrels being bottle-fed, after it was rescued by an animal control officer. – Yahoo! News

“This little guy and his sisters were rescued by our animal control officer from an abandoned nest at Elsie Turner Park,” police said.

“It’s safe to say that these critters are in good hands,” they said. – Waltham Police via Patch.com

Squirrels getting a little too close for comfort? Environmental conditions are pushing wildlife further toward human dwellings. 🐿️

A1 Exterminators will handle your wildlife removal safely and humanely, so you don’t have to risk disease or injury. 🐿️

Contact A1 Exterminators today to handle your wildlife removal.