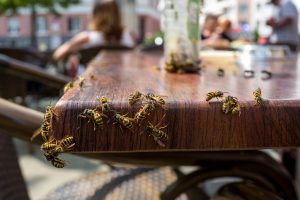 Wasps are Back by (Un)Popular Demand

For some, the end of summer may mean the end of flip-flops and lazy days by the pool, but it certainly does not signal the end of wasp season. In fact, at this point in the season, wasp populations are reaching their largest numbers, having had the entire summer to reproduce. With more than half a million people being sent to the emergency room every year due to wasp and other insect stings, the National Pest Management Association (NPMA) reminds people to take extra care to avoid wasp stings and infestations.

“Wasps are known for their unprovoked aggression,” says Missy Henriksen, vice president of public affairs for NPMA. “In the late summer months, these pests are busy scavenging for food to prepare for the colder months ahead, and are often attracted to backyard barbeques and picnics, which increases your chances of being stung. Proper pest control is crucial to protect against their painful stings.”

NPMA recommends that homeowners inspect their properties frequently for signs of a wasp infestation. Common nesting sites include under eaves, on ceiling beams in attics, garages and sheds, and under porches. If homeowners find a nest or suspect an infestation, it is critical that they hire a pest professional. Attempting to remove a nest can be extremely dangerous, as wasp colonies can have upwards of 15,000 members.

The NPMA offers the following tips to help protect homeowners from wasp encounters: