It’s officially summer, which means tick season is in full swing. Like other creepy crawlies that feed on our blood and spread disease, ticks can cause a lot of anxiety, which has led to plenty of misinformation regarding how dangerous they are, how they find prey, and the best ways to get rid of them. Before venturing outdoors, read up on the most common myths about ticks.

1. THE MYTH:  Burning them works better than tweezers.

After spotting a tick latched to their body, some people make the problem worse by grabbing a lighter. According to the myth, burning a tick off your skin is the most efficient way to remove it, but Kirby C. Stafford, the chief entomologist at the Connecticut Department of Entomology, says this thinking is misguided. “Imagine trying to burn something the size of a sesame seed or poppy seed or smaller attached closely to your skin,” he tells Mental Floss. In addition to being potentially painful and dangerous, this method also puts you at a higher risk of infection. According to a paper from 1996, people who had dealt with ticks using non-tweezer methods were more likely to contract a tickborne disease. People who removed them by pinching them with tweezers close to their skin and lifting them off, as Stafford recommends, were less likely to get sick.

2. THE MYTH: Swabbing them with soap is an effective removal method.

If you’re squeamish about plucking off a tick with tweezers, smothering it with a cotton ball soaked with liquid soap, nail polish remover, or rubbing alcohol may sound like a tempting alternative. But this is another bogus method experts recommend you avoid. Creating an inhospitable environment for the tick in the hopes of it detaching on its own takes more time than removing it with tweezers, and that creates more opportunities for pathogens to enter your bloodstream. Only swab with rubbing alcohol after the tick has been removed—it’s a good way to kill lingering microbes.

3. THE MYTH: Yicks are easty to spotour can feel a tick bite when it happens.

Don’t count on a tick alerting you to its presence when it digs in to feed—most tick bites are painless, so unless you’re looking for it, a tick can go undetected on your body for days or however long it takes to get its fill. So instead of assuming you’ll feel the tick if it’s there, make a habit of scanning your clothes and body whenever you come in from the outdoors, using a hand mirror to check the spots you can’t see.

4. THE MYTH: Ticks are only a problem when you’re hiking or camping.

People tend to worry about ticks when they’re on a weekend camping trip or a long hike through the woods—not so much when they’re safe at home on their own property. But according to Stafford, most people pick up deer ticks close to their houses. Even if you don’t live in a heavily wooded area, certain spots of your yard may be harboring them. “They can be found in groundcover, mixed unkempt grassy vegetation, and similar areas,” he says, “even on a trip to the mailbox on the street or by the garden hose next to the front porch.” 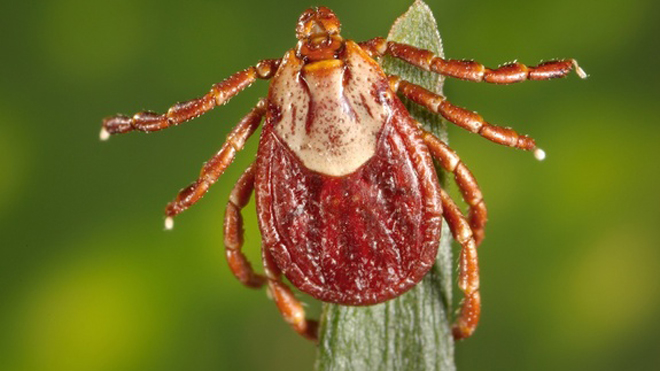 Many people have only seen a tick after it has been feeding on their blood for days. This doesn’t paint an accurate picture of what the arachnid looks like most of the time: When they’re engorged, female deer ticks are two to three times their normal body size and darker than usual. In order to catch a tick before it has a chance to make a meal of you, you need to look for a reddish-brown speck that’s roughly 3 to 5 millimeters long, or the size of a sesame seed, while nymphal ticks—which are responsible for the majority of infections—are the size of a poppy seed.

6. THE MYTH: Ticks disappear in the water.

You’re most likely to encounter ticks during the warmer months, but that doesn’t mean you should let your guard down completely come winter. While adult ticks are dormant for most of the season, they can be active as long as the weather is warmer than 40°F—and with climate change raising temperatures year-round, unseasonably warm winter days are more likely than ever. According to the Centers for Disease Control, illnesses spread by ticks more than doubled between 2004 and 2016, and experts pin part of the blame on the weather.

7. THE MYTH: Only deer ticks are dangerous.

Deer ticks are notorious for transmitting Lyme Disease, an illness that can cause serious symptoms, especially if it’s not caught early. While deer ticks and the related western blacklegged tick are the only tick species in America known to spread Lyme, the American dog tick of the eastern half of the U.S. is a common carrier of Rocky Mountain spotted fever, which can be life-threatening when not treated with antibiotics. The lone star tick, which is native to the southern and eastern U.S., made news last year for producing a spontaneous allergy to red meat in some of its victims.

8. THE MYTH: Ticks jump from trees.

Ticks are bad enough without having to worry about them raining down on you every time you walk under a tree. Fortunately, these kamikaze-style attacks are just a myth. Ticks can’t fly or jump, and they much prefer hanging out near the ground where they can attach to the legs of passing mammals to lurking in tree branches far from their prey. But that doesn’t mean your scalp is safe. As Stafford says, “Most are picked up on the legs and they can crawl up amazingly quickly.” He says a deer tick is capable of scaling a leg in a few minutes or less.

9. THE MYTH: A tick head is still dangerous after  you removed the body.

Ideally when you pull off a tick with tweezers you should remove the whole thing—not just the body without its head. But if you aren’t 100 percent sure you got the full tick off on the first try, don’t panic. A disembodied head or biting apparatus attached to your skin won’t be able to transmit disease, move on its own, or grow back into a full tick. It might irritate the skin around it, but usually it will fall out on its own.

Ticks have a keen sense of smell they use to hunt their prey, but it isn’t blood they’re searching for. They’ve evolved to sense carbon dioxide, a.k.a. the gas you emit every time you exhale. When a tick detects CO2, it might (depending on the species) react by dashing toward its potential host—and unless you can hold your breath whenever you’re outside, there’s not much you can do to hide from them.

11. THE MYTH: Lyme disease always comes with a bullseye rash.

If it’s been several days since you were bitten by a tick and there’s still no sign of the telltale bullseye rash at the bite site, you may assume you’re in the clear. But according to the National Center for Health Research, fewer than 50 percent of all Lyme infections produce this symptom. A more accurate way to check if you have the disease is to look for several early symptoms instead of just one—these might include muscle weakness in the face, lightheadedness and shortness of breath, fever, and joint pain. These signs usually appear within a month following a tick bite if you’ve been infected.

A1 Exterminat0ors can spray your property for ticks, contact us to schedule a treatment form our “Defend Your Yard” program.