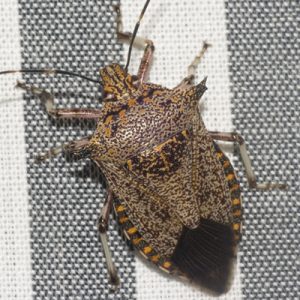 The Brown Marmorated Stink Bug (referred to by the acronym, BMSB) (Halyomorpha halys) is a newly introduced pest in the United States. It is speculated that the adult insects stowed away inside bulk freight containers arriving from Asia, as happens with many invading insects to get here. BMSB is considered a nuisance pest because of its tendency to aggregate and infest in dwellings (much like Asian lady beetles or box elder bugs) at certain times of the year. Because they are a relatively new phenomenon and more and more pest firms are receiving calls on them, some history, biology and control of these pests should be understood. The first specimen was positively identified in 2001 in the Allentown, Pennsylvania area (Hoebeke and Carter 2003). Unlike other stink bug species, the BMSB will enter homes and other buildings seeking warm, over wintering sites. This behavior results in many complaints to pest management professionals. By 2001, the stink bug had been found in five counties in eastern Pennsylvania and two counties in New Jersey (Hamilton and Shearer 2002). This stink bug may also become a major agricultural pest in North America, similar to the southern green stink bug, Nezara viridula (L.). In eastern Asia where the BMSB is native or indigenous, it is a pest on fruit trees and soybeans. BMSB is ideal for a “hitchhiking” type of dispersal, due to it’s over wintering behavior. In addition, it is also a very strong flier. Eventually, it will probably spread throughout the United States and southern Canada (Bernon 2004). In addition to the many confirmed reports from Pennsylvania and New Jersey, there were isolated reports from several eastern states and Oregon (LaBonte 2005). Rutgers University has been tracking the expanding distribution while evaluating options for future integrated pest management (IPM).