How Cockroaches Are Different from Beetles 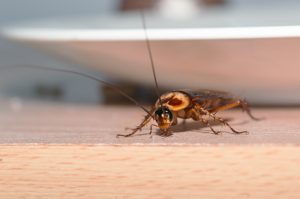 Most beetles have spiny legs, just like cockroaches. But beetles’ legs tend to be shorter than cockroach legs. On the ground, beetles are the occasional household pest, you’ll notice that its mouth has pincers. You won’t find these on a cockroach.

You can also look at the wings (if it has any). Flying roaches have a single pair of long, thin wings. Beetles usually have two pairs of wings, one of which is thick and protective.

If the bug you saw was flying around your house and fluttered away as you tried to swat it, it probably wasn’t a cockroach.

Most roaches don’t like to fly. Even among the ones that can, they’re rarely very good at it. Roaches mostly use their wings to glide or “hop” to higher elevations. They like to keep their feet on the ground, where they’re fast runners.