Why Cockroach Infestations are Dangerous 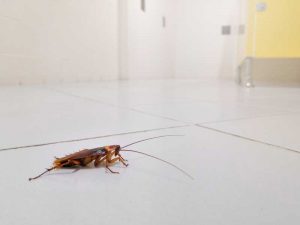 Cockroaches carry 33 types of bacteria and six types of parasites. The spines on their legs add extra surface area, which easily picks up bacteria and parasites from the surfaces they touch. They also eat garbage, sewage, and anything else they can find, which passes through their system and into your house when they defecate. If that’s not bad enough, bacteria that can make people sick doesn’t faze the hardy cockroach.

The American cockroach lives in sewer systems, manhole covers, and steam tunnels in urban environments, and in animal barns and manure piles in rural ones. Think about what those six legs and myriad leg spines are touching as they run about. These environments contain all types of bacteria, especially E.coli and salmonella. When the American roach picks up this bacteria on its feet, it easily transmits it onto other surfaces including counters, sinks, and places where food is prepared. It can also transmit bacteria onto crops such as lettuce, spinach, and berries. If these crops aren’t washed adequately, a food poisoning outbreak can occur.