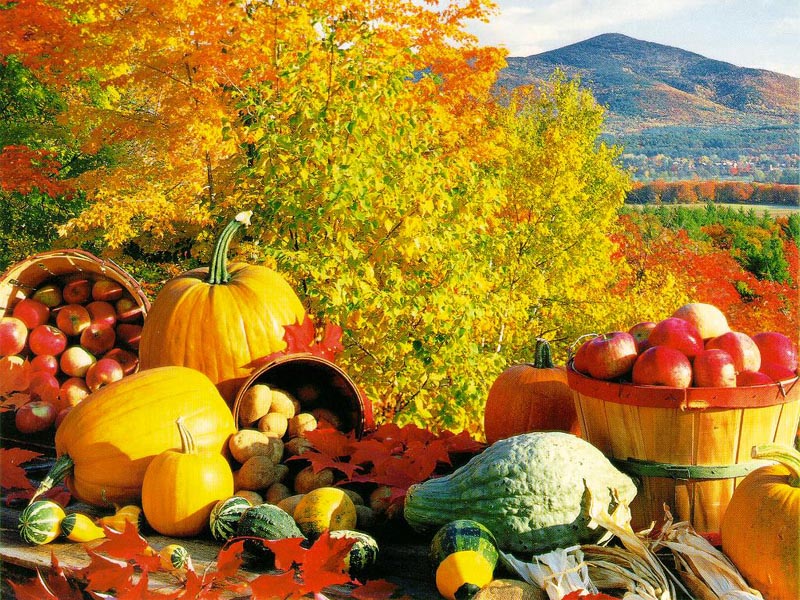 Thanksgiving is only 2 weeks away, it is a traditional holiday in the United States and Canada. It is a day set aside to give thanks for a bountiful harvest. This North American holiday is rooted in the European custom of a harvest celebration. Humans, it seems, at least those living in temperate regions, have long recognized the need to have a good store of food for the winter months. A good harvest meant food for the winter. And that was reason to celebrate!
Winter is a difficult time for all living things, not just for humans. Many different strategies have evolved in nature to deal with the icy breath of old man winter. Some plants and animals suspend biological activities at the approach of temperatures below freezing. That’s when trees drop their leaves, and frogs, chipmunks, bears and woodchucks go into hibernation. Insects, like ladybird beetles and boxelder bugs, also hibernate.
Some living things are called annual organisms. That’s because these plants and animals live only one season. Such populations continue because the next generation survives winter in a stage resistant to freezing temperatures. Seeds of some plants and eggs, larvae and pupae of some insects are adapted to winter survival. In these cases, the mature plants and animals die, but their offspring will survive the winter.
There are also animals that can’t survive cold northern winters but that live in such regions during the spring, summer and fall months. These animals are known as migratory species because they leave for warmer climes during the winter. Many bird species are well-known migrants. Among our fine-feathered migratory friends are the hummingbirds, swallows and many waterfowl. Birds migrate not because they can’t stand the cold but because their food or necessary habitat, such as open water, does not exist during the winter.
A few species of insects can be classified as migratory. The only true migrant insect is the monarch butterfly. This butterfly species spends the winter in the mountainous regions of Mexico and returns each spring to summer breeding grounds, some as far north as Canada. But, unlike migratory birds, individual monarch butterflies do not return to a breeding ground. The butterflies that return to a summer habitat are descendents of last summer’s population.
A few insect species do not survive in northern climates but return each spring from southern regions. Many of these insects hitch a ride on the weather fronts of spring and are literally carried into summer breeding grounds. Some of these hitchhikers are major pest insects, such as cutworms, aphids and leafhoppers.
Social insects are somewhat like humans in that they store up a food supply for winter use. Honey bees and some ant species should probably have a thanksgiving to celebrate a successful harvest. After all, whether or not these insects survive the winter is dependent on having enough food to eat.
Honey bees generally produce more honey than is needed by the colony. So we humans help ourselves to the excess. As it turns out, honey is just as good a human food as bee food. Honey-glazed ham and biscuits topped with honey are sure to be included in many Thanksgiving meals.
Thanksgiving time is also a time when other insect work of the summer is revealed. As the leaves drop from the trees, the grey paper nests of bald-faced hornets become visible. Mud dauber nests are discovered under the picnic tables, which are being moved into winter storage. The homeowner cleaning the gutters of leaves will find paper wasp nests under the eves. Praying mantid egg cases will show up attached to small twigs of trees or on stems of plants in the garden.
Thanksgiving is a time for celebration. For humans and a few insects, enough food has been stored for the winter. For other insects, such as the praying mantid, the eggs are in the case. For mud daubers, pupae are in the mud cells. In hornets and paper wasps, queens have been produced, have left the nest and are in hibernation in protected places. Yes, the work of summer is done, and it’s time for a long winter’s rest!
http://www.agriculture.purdue.edu/agcom/newscolumns/archives/OSL/2006/November/061122OSL.htm