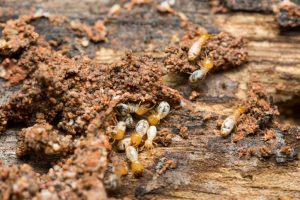 Subterranean termites are social insects that live in colonies containing caste systems. Typical colonies have three distinct castes: reproductives, workers and soldiers. The reproductives, including the queen and king, are responsible for mating and populating the colony. A queen is the largest and most important termite found in the colony, producing up to 1,000 eggs per day. The workers are the largest group in most termite colonies, repairing the nest, grooming and caring for nest mates, and foraging for food. Soldiers, equipped with huge armored heads and sharp, enlarged mandibles, defend the colony from attack. The queen may live for many years, and individual soldiers and workers may live one to two years. During certain times of the year, “swarmers” will emerge from colonies. These winged adult reproductives leave the current colony to form their own. They typically only produce a few eggs in the first year, but once the colony’s queen matures she will produce about 5,000-10,000 eggs a year. It typically takes several years, often between five and 10, before a colony reaches a mature size of at least 60,000 termites.