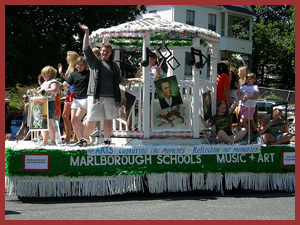 Marlborough, Massachusetts has a proud tradition of hosting the largest and most prestigious Labor Day Parade in New England!

In 1952, Mayor, Romeo J. Gadbois founded the first, annual Labor Day Parade as a way to brighten the lives of the Marlborough area communities which were, along with the rest of the nation, rebounding from WWII and then setback by the onset of the Korean War.
The first parade, managed by Louis Ghiloni, the city’s first Recreation Director, consisted of about 12 marching units. In the 58 years that followed, the parade has grown to be a New England premier event, consisting of over 150 bands, floats, and other entertaining entries. 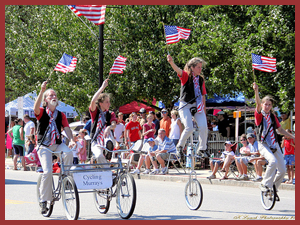 Over the years, the management and growth of the parade has been a volunteer effort, most of which attributed to the efforts of George Whapham, who was the Parade Director from 1981 through 2008. The directorship and all the positions of parade day staff remain a volunteer effort.
Funds for the operation of the parade are partially a city line item, but the majority of the cost is covered by private and commercial donations.
Preparations for the parade start in February and then jump into full gear in April, increasing steadily until Labor Day.
Just remember to keep yourself protected from those pesky mosquitoes while you and your family are out for the day!!!