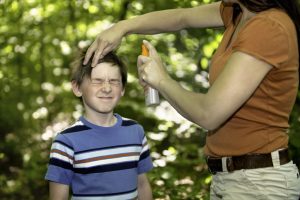 Choosing an Insect Repellent for Your Child

Mosquitoes, biting flies, and tick bites can make children miserable. While most children have only mild reactions to insect bites, some children can become very sick.

Read on for more information from the American Academy of Pediatrics (AAP) about types of repellents, DEET, using repellents safely, and other ways to protect your child from insect bites.

Insect repellents come in many forms, including aerosols, sprays, liquids, creams, and sticks. Some are made from chemicals and some have natural ingredients.

The AAP recommends that repellents should contain no more than 30% DEET when used on children. Insect repellents also are not recommended for children younger than 2 months.

By: American Academy of Pediatrics