How Dangerous Are Bat Droppings? 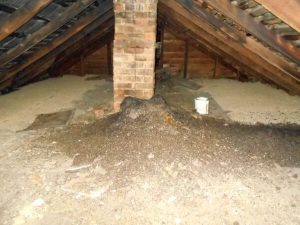 Bat droppings are a bad thing to have around, because they are a source of diseases that will affect other animals, pets, and people. At the same time, because bat droppings have such mineral and vitamin content, it makes the perfect stuff to fertilize your garden with … Except, you might not want to do that.

Do you know what Histoplasmosis is? What about Cave disease or Caver’s disease? Ohio Valley disease? Darling’s disease? They’re all the same thing – histoplasmosis – a disease that is specifically caused by a type of fungus called Histoplasma capsulatum. No, we didn’t make it up! You’ll find it in bat droppings.

Once you are exposed to the fungus, symptoms usually start to rear around the seven day mark, although, it can be as few as two or three days or a couple of weeks later. Many people don’t even shown symptoms, or just feel a tad run down for a day or so. They’re the lucky ones.

Although chest x-rays will likely come back benign, you may experience a cough that is rasping and painful, along with symptoms that you would normally associate with a cold – headaches, feeling generally unwell, being very tired, muscle aches, chills, fever, etc. You might even think that you just have a bad cough or a cold, or perhaps even a touch of the flu.

If you don’t get treatment, symptoms get worse … a lot worse. It starts with respiratory problems, which is the area of the body the disease seems to compromise the most. Pneumonia can develop, and if you are already sick or somewhat immune-deficient, it’s a disease that can prove deadly.

You might think that cleaning away the guano by giving it a good sweep will do the job, but that could make things worse. The fungus can be sent into the air once the feces have become dry and dusty, and then you could inhale it. And don’t forget about your pets