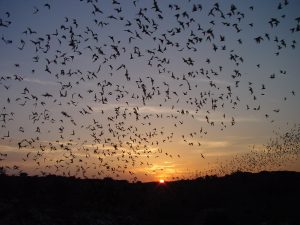 Bats belong to a group of animals called Chiroptera (Kir-op-tera), which means “hand wing.” Look closely at the structure of a bat’s wing, and you’ll see why!

Bats are the only mammals capable of true flight. Other mammals like the flying squirrel glide rather than actually fly. Bats are often seen swooping through the sky at dawn and dusk chasing insects, which are the primary food source for most bats in North America. Catching insects in flight in the dark is no small feat. This trick requires special skills, like echolocation and amazing aerial acrobatics.