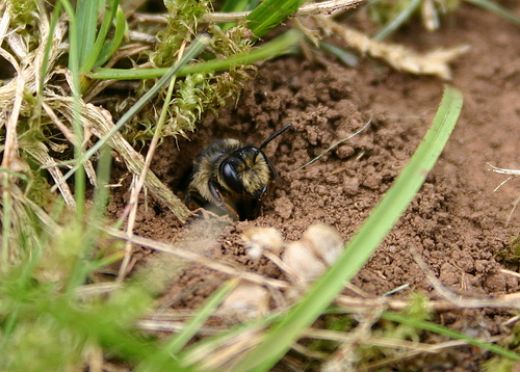 Many of us have no idea that ground bees (mining bees or digger bees) even exist.  Well, I can confirm to you that there are many different ground bees and yes, they do burrow themselves under the dirt and make their nest underground.  The funniest fact to me about ground bees is the sheer number of people who have no clue the even exist yet they probably have multiple nests in their own backyard.
Ground bees are not aggressive and rarely, if ever, sting, they are the most peaceful of all bees. The presence of numerous bees flying close to the ground, however, may constitute a nuisance for some people. Sometimes large numbers of males will fly about the same spot for several days in a mating display.
Ground bees  nest in burrows in the ground. Unlike the honey bee, mining bees are “solitary” bees. They do not form long-lived colonies, nor do they live inside a single, well-defended nest controlled by one queen bee. Instead, each ground bee female usually digs her own individual burrow to rear her own young.
Ground bees range in size from about the size of honey bees to much smaller. The larger bees are furry and usually darker in color than honey bees. Some are brightly striped, while others are a shiny metallic green. Ground bee burrows may be located wherever there is exposed soil and good drainage. They are frequently found nesting in banks, such as along road cuts or any type of excavation, but may also be in level ground as well. The holes are about 6 mm (1/4 inch) or less in diameter. They are sometimes surrounded by a small mound of soil that the bee has brought up to the surface. Burrow structure varies according to species, but often there is a vertical tunnel with smaller side tunnels that terminate in a single cell.
The female ground bee stocks each cell with pollen and nectar she collects from flowers and then deposits an egg on the food mass. The larva hatches and consumes the stored pollen and nectar. When mature, it becomes a pupa, or resting stage, and finally becomes an adult bee. The adult bees overwinter below ground in the burrow site. During the next spring or early summer the adults emerge, mate, and the females begin burrow excavation. Ground bee populations can fluctuate dramatically from one season to the next.