↓ Skip to Main Content
Home › Beetles, Cockroaches & Other Insects › Cockroaches In your home

Cockroaches In your home 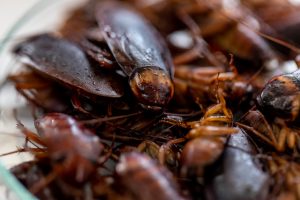 Cockroaches are considered a pest because they can contaminate food and kitchen utensils with their frass (droppings), possibly spreading microbes and causing health problems. Some people may be allergic to cockroaches, or their byproducts, and many people dislike their appearance. Large infestations can result in an unpleasant smell.

There are about 5,000 species of cockroach but only a handful make it to “pest” status, mainly because they make a living in houses.

Two species that are most likely to be found in your home are both are “ring-ins”: the American Cockroach, Periplaneta americana, and the German Cockroach, Blattella germanica.

The German Cockroach is perhaps the most feared due to its high reproductive potential – one female can give rise to more than 10 million individuals in one year (three to four generations) – and the fact that they are believed to mechanically transmit disease. This species has a very broad dietary range.

The American Cockroach is commonly found in sewer systems. Other species that can be found co-habiting with humans are the Brown-banded Cockroach (Supella longipalpa) and the Oriental Cockroach (Blatta orientalis).

If you are seeing cockroaches outside the kitchen area and during the day you have a major problem or at least a significant infestation.