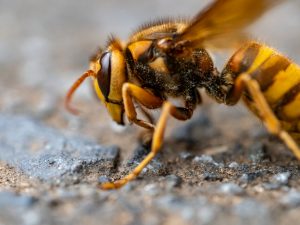 Social wasps and hornets, on the other hand, can be extremely aggressive if you threaten their lives or their nests. Often, they’ll swarm intruders and deliver multiple stings. Swatting at wasps is, shall we say, a bad idea. Doing so triggers the insect to release pheromones alerting other wasps to a threat (you) and that it’s time to attack.

Even one wasp sting can be very painful. Multiple stings might cause serious harm, particularly to anyone who’s allergic to the venom. And in worst-case scenarios, wasps might sting dozens or hundreds of times, an act that can kill even strong, healthy people who aren’t allergic to the venom.

The best strategy is to keep food covered if outside, particularly sugary drinks, so you don’t attract wasps. If one wasp flies near you, remain calm; it will probably just fly off. If a swarm comes near you, run away in a straight line without waving your arms.

By: How Stuff Works