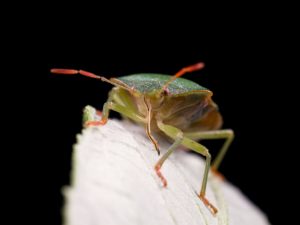 As the season begins to change and cooler weather approaches, stink bugs are starting to leave the garden and seek warmth and shelter indoors. The National Pest Management Association (NPMA) encourages homeowners to take proactive steps to prevent a stink bug infestation in and around the home this fall.

Since arriving from Asia, brown marmorated stink bugs have become a nuisance for homeowners in the Eastern United States. The species can be found from South Carolina to New Hampshire and west to Indiana, as well as in California and Oregon. Notorious for their “smelly” reputation, stink bugs secrete a bad-smelling, bad-tasting fluid when disturbed or when crushed. They are not known to bite humans but caution should be used when handling them to avoid a release of their odor.

“Homeowners should expect to see an increase in stink bugs in the coming weeks as they begin to take flight in search of overwintering sites,” said Missy Henriksen, vice president of public affairs for NPMA. “Although these pests do not pose any serious health or property threats, their tendency to seek food, water and shelter in homes during the colder months can be a nuisance.”