Continuing their research into potential ingredients for human-safe pesticides, Drexel University researchers recently found an artificial sweetener that, while harmless for male fruit flies, proved particularly lethal for females. Their findings are published in the Journal of Insect Science.
Past research conducted by the team at Drexel indicated that erythritol, an artificial sweetener in name-brand products like Truvia, is poisonous to fruit flies. Building on that research, the Drexel team tested four different polyols (sugar alcohols) to see which shortened the lifespans of the fruit flies (Drosophila melanogaster). 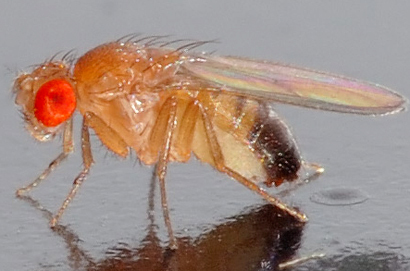 As expected, erythritol was effective in killing off the flies. Two of the polyols — malitol and xylitol — showed no noticeable effect on the flies. But the fourth artificial sweetener, D-mannitol, was found to be poisonous only to female flies.
“We are excited but a bit puzzled by this finding,” said Sean O’Donnell, one of the co-authors.
For the study, flies were divided into groups and assigned a sweetener for their consumption. Two control groups were also a part of the study. One control group had sucrose, a naturally occurring sugar, mixed in with its food, while the other control had nothing mixed in its food. Using the flies’ normal food to present the sweeteners was important because it showed that the flies were not simply avoiding eating.
Data indicated a steep decline in the numbers of flies who consumed erythritol once they were fed the sweetener. They began dying at a significant number around the fourth day of the experiment. By the end of day six, they’d all died.
“We confirmed that erythritol is toxic to insects — specifically fruit flies — when ingested,” O’Donnell said. “The strongest effect is specific to erythritol. Other similar compounds were either not effective at reducing fly longevity or had limited effects.”
D-mannitol is a sweetener typically used to sweeten gum or add a coating to hard candy or dried fruit for those with diabetes. The flies given it didn’t display any noticeable signs of toxicity for roughly a week.
It was around the seventh day of the experiment when the D-mannitol group began to display a higher death rate. By day 12, it was a statistically significant difference. And on day 17, the last day of the experiment, the flies that consumed D-mannitol were half as likely to survive as the flies in other groups (flies given malitol and xylitol displayed no significant difference in lifespan from the control groups).
Although D-mannitol doesn’t appear to be as highly toxic for flies as erythritol, its lethality for female flies is significant — female flies were five times more likely to die than males after consuming D-mannitol.
“Implications for insect control could exist, because females are the real reproducers and affecting females can reduce population growth,” O’Donnell said. “Furthermore, many social insect pests — such as Hymenoptera, which includes ants and wasps — have female-based colonies.”
It’s unclear why the effects were skewed so firmly against female flies. O’Donnell hopes to study insect D-mannitol consumption further, as there are “potentially very interesting [aspects] from an insect reproductive physiology perspective.”
Nothing in the study should influence whether or not someone adds artificial sweetener to their coffee or tea, however.
“All the compounds we tested are vetted and human-safe,” O’Donnell explained. “The effects on insects don’t really inform human health issues in this case.”