↓ Skip to Main Content
Home › Insects › Bed Bugs › What should I know about Bedbug habitat and feeding habits?

What should I know about Bedbug habitat and feeding habits? 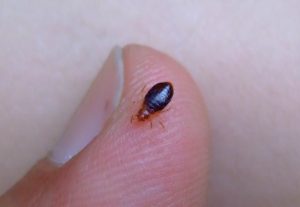 They generally live in small groups as opposed to nests or hives. The bugs lay eggs, and the eggs hatch into incredibly small nymphs, only about 1/16th of an inch long. The nymphs go through molten stages and grow into adult size in about 5 weeks.

They reproduce quickly. The females of the species lay between 1 to 12 eggs daily, and throughout their short lifetime, they can produce up to 500 eggs. Generally, the bugs lay eggs and grow the fastest in temperatures around 80°F.

The bugs mostly feed on the blood of humans, but they have been known to drink the blood of other animals, such as bats, guinea pigs, chicken, cats, dogs, certain birds and rodents. They can survive as much as a year without food, though spending such a long time without feeding is not typical. However, they are generally able to easily wait up to seven months without food. They can also survive for as long as a year and a half with no oxygen. Once fed, they turn dark red in color, and the bug will also appear bloated in the same way that fattened ticks become round after a feeding.