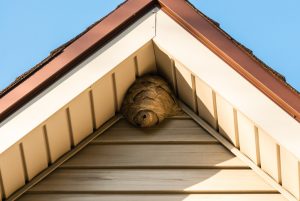 Many of us use the words hornet and wasp interchangeably, but that’s a vast over generalization that does a disservice to these winged creatures. Understanding the differences between hornets and wasps might help you to make better pest control decisions, prevent you from killing beneficial species, and of course, maybe keep you from getting a painful sting.

Here’s the biggest thing to know: All hornets are wasps, but not all wasps are hornets.

There are more than 100,000 wasp species on Earth, each a testament to the startling diversity in these winged bugs. They’re found in every part of the world except polar areas. It’s usually easy to identify them, as they most often have black and yellow stripes, a well-defined and narrow waist, and a tapered abdomen.

Wasps and hornets chew up wood fragments and use the resulting pulp to build their signature papery nests. You’ll find these nests, which have a honeycomb-style segmentation, on many horizontal surfaces, including roof eaves, garage ceilings and other places, dangling from a single thin thread. Some hornets, like the giant European hornet, may also burrow into the ground to build nests. Their nests may be as large as a foot in diameter.

“Hornets are predators [and] scavengers, as are most wasps,” says Gibbs. “From an evolutionary perspective, bees are also wasps.” Wasps, like bees, are incredibly important pollinators, helping plant to keep plant life and agricultural crops healthy. They tend to chow down on caterpillars and harmful flies, too, making them beneficial to humans. That’s one reason some places, like Germany, ban people from disturbing these creatures.

Wasps also exhibit a voracious affinity for sugary foods and drinks, and as such they often make themselves unwelcome guests at outdoor gatherings like picnics or sporting events.

Furthermore, they also love the sweet deliciousness of rotting, fermented fruit that falls to the ground in autumn. They’ll gorge themselves to the point that they’ll become drunkenly aggressive, sometimes chasing pets or people if they feel annoyed or threatened.

By: How Stuff Works