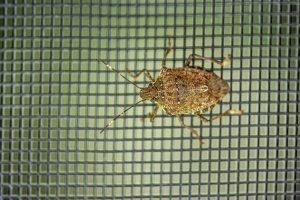 Native to Asia, stink bugs were accidentally introduced into the United States sometime during the late 1990s. As an invasive species, they do not have any natural predators and can therefore rapidly spread. Stink bugs have become established in many areas of the country, posing a particular threat to the agricultural industry as they destroy crops. Stink bugs can damage ornamental plants, fruit trees, and gardens, but they are more of a nuisance than a threat to people. They do not cause structural damage or spread disease.

The brown marmorated stink bug cannot sting and is not likely to bite, but care should be exercised when handling them to deter these pests from releasing their well-known and unpleasant odor. The stink bug’s mouthparts are grouped in the piercing/sucking category, but they do not use blood as a food source like mosquitoes, biting flies and bed bugs. Their mouths are not structured in a way that enables them to bite through human skin. Most species of stink bugs feed on plants. They suck the juice from leaves, stems and roots of plants. They attack everything from ornamental plants to weeds. The insects pierce the skin of the plant and extract the juice inside.