Squirrel diseases and what to look for 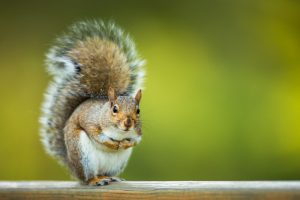 Leptospirosis
a squirrel standing on a rockThis disease caused by the bacterium Leptospira is common in many wildlife species including squirrels. In humans, symptoms of Leptospirosis include headaches, fever, weakness, rash and an array of symptoms that are often mistaken for other conditions. Severe cases of Leptospirosis can cause kidney damage and liver failure and could be life-threatening.

Lyme Disease
We generally associate Lyme disease with ticks, but since squirrels often host ticks, they can contract the disease and spread it to humans as well. If Lyme disease is left untreated, it can cause an inflammatory disorder which affects the nervous system, joints, and heart.

Rabies
It is rare to contract this viral disease in the US because of our awareness and preventative measures for it. However, a squirrel infected with rabies can pass it on to a human through biting or scratching. A rabid squirrel or other forms of wildlife in the late stages of the disease will act in a strange manner. It may be aggressive and hyper, or lethargic and not alert, or it could be unable to walk and move around normally. This virus attacks the nervous system. It starts at the point of the bite and travels to the brain where it rapidly multiplies and spreads through the body. Once symptoms appear, the disease is fatal.

Salmonellosis
Salmonella is a bacteria that can be found in the droppings of most all wildlife species including squirrels. Salmonellosis can lead to symptoms similar to food poisoning such as stomach cramps, diarrhea, nausea, and vomiting.

Tularemia
Tularemia is caused by the bacterium called Francisella tularensis. It can be spread to humans through the bite of an infected squirrel or through physical contact with a living or dead infected squirrel or contaminated food, water, or droppings. The bacterium spreads easily and can enter the undamaged skin. The bacteria grows in the blood and causes a high fever. It can be a deadly disease if left untreated.