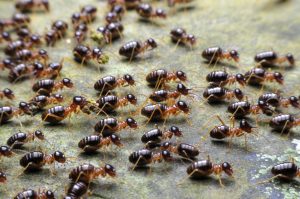 The soldiers commonly have an orange coloured armoured head termiteswith mandibulate pinchers which they use to crush an attacker, such as ants; some have hard pointed snout which eject a white sticky latex to ensnare their enemies.

The soldier termite is usually the first to be seen in large numbers when any active termite workings (shelter tubes or damaged timber) are opened. Soldier termites will rush out to guard the opening whilst worker termites repair the breach.