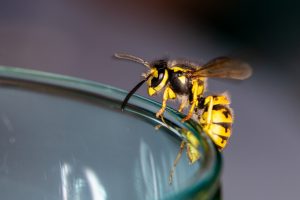 Here are some general tips on avoiding insect stings;

Yellow jacket traps can help keep the population of a nest in check if they’re set out in spring and early summer, when the population in the yellow jacket colony is small. Later in the season, placing the traps around the perimeter of an outdoor seating area may help reduce their pestering, but the traps won’t do much to reduce the overall population.