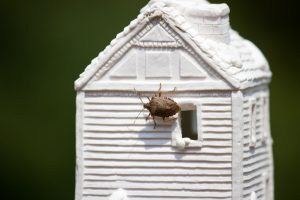 The family Pentatomidae, to which these garden pests belong, contains some 900 genera and over 4700 species. More common types include brown, green, rice, Southern and dusky stink bugs. Other family types include shield bugs and chust bugs. Most are identified by their shield, the hardened part of their thorax that gives them the appearance of being armored.

Coloring can be solid or mottled and can range from brown and black to bright green with red or orange trim. The widely distributed Conchuela stink bug can be black in southern states, green in northern states, and a strange combination of the two in the area between. Conchuela feeds on fruits and crops including grapes, peas and tomatoes. In dry regions it feeds on sage, yucca and prickly pear.

The characteristic odor — some describe it as the smell of rotted cilantro — comes from glands located on the thorax. It’s released as a defensive mechanism and can be a nuisance for those working in their gardens or, especially, if found in clusters, on the ground or on sides of trees.