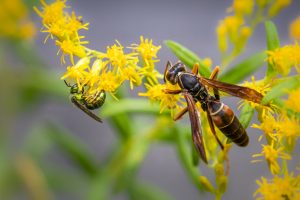 With more than 100,000 species, there’s a lot to learn about wasps. They fall into two main categories:

Social wasps build nests and live in colonies of up to thousands of individuals. Hornets and yellowjackets are social wasps.

Solitary wasps don’t live in large nests with other wasps, but live alone. Some build small nests in the ground or in natural crevices. Others get their nests from other insects. Parasitoid wasps lay their eggs in the bodies of “host” insects, while cleptoparasitic wasps steal their nests to use as their own.

By: American Museum of Natural History