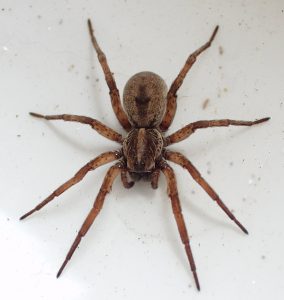 This large family of spiders derives its common name from the tendency to chase and pounce on prey. Wolf spiders are generally dark in color and recognizable by their unique eye arrangement: one row of four small eyes under two rows containing two eyes each. Mother wolf spiders drag their egg sacs with them and then allow their offspring to ride on their backs after hatching. Common wolf spiders in New Hampshire and other parts of New England include Hogna baltimoriana and Gladicosa gulosa. Though these are one of the more visually concerning spiders in NH, wolf spiders tend to only approach human homes in the autumn months, when the region gets colder.