How to avoid bed bugs at college 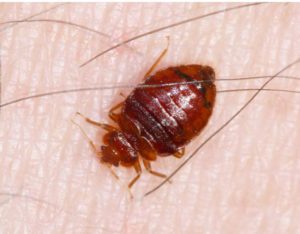 Just the idea of bed bugs makes my skin crawl. Typically, I think of getting bed bugs by staying in a hotel that is somewhat shady, but you can get bed bugs anywhere, including your own bed.

Bed bugs in dorms and student apartment complexes are a big problem. It can be difficult to know when you have bed bugs because they are small and typically nocturnal, so you probably won’t see one or two just lounging on your bed. They often hide in dark crevices and place their eggs in fabric seams, and only come out at night to snack on your blood while you are sleeping. Creepy, huh?

If the thought of sharing your bed with a colony of bugs doesn’t really bother you – well, I don’t know how it could not completely disgust you – then think about the annoying bites you are likely to receive. Bed bug bites cause cimicosis, a skin condition that varies from person to person. According to The Mayo Clinic, allergic reactions to bed bug bites result in red bumps or welts, typically formed in a cluster or line, and are very itchy. These bites are similar in appearance to mosquito bites. Unfortunately, bed bug bites can last much longer and be much itchier. However, almost 50 percent of bed bug victims do not react to bed bug bites; at least there’s one positive.

Luckily, bed bugs do not cause serious physical health issues. They do not transfer blood born illnesses between humans, which is definitely a good thing. The only real physical problem associated with bed bugs is cimicosis. However, many people become paranoid about sleeping with bed bugs, which can cause insomnia and nervousness. Honestly, I doubt I could stand having bed bugs without suffering these problems either.

So, what do you do if you think your dorm room might have bed bugs? They give themselves away by the bites on your skin, and some heavily infested areas smell like coriander.

Don’t think that just washing your sheets will cure the problem, because contrary to popular opinion, bed bugs do not care if their environment is clean or dirty.

The best way to handle this situation is to tell your RA as soon as possible, and ask them to call an exterminator.