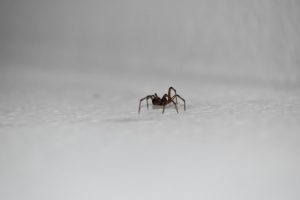 The common house spider randomly selects its web sites and creates a tangled web. If a web does not yield prey (food) it is abandoned, another site is selected, and a new web built. Eventually, successful webs are constructed where air currents bring in prey. House spiders have a difficult time surviving in modern homes due to low humidity and fewer insects for food. They are more likely to be found inside structures like garages, sheds, barns and warehouses. Outside, these domestic spiders are often around windows and under eaves, especially near light sources that attract prey.

Inside structures, house spiders are most likely to be found in upper corners, under furniture, in closets, angles of window frames, basements, garages, and crawl spaces. In warehouses, they are common in corners near doors that stay open. Because of their web site selection by trial and error, many house spider webs may be constructed in several days. Dust collecting on these webs accentuates their presence.