↓ Skip to Main Content
Home › Beetles, Cockroaches & Other Insects › This Fall is Full of Stink Bugs

This Fall is Full of Stink Bugs

First came spring and the ticks, bearers of Lyme disease and destroyers of worry-free walks in the woods or fields. Then, the mosquitoes in summer’s heat, carrying the potentially deadly West Nile and Eastern equine encephalitis viruses and forcing people to change their outdoor habits.

Now, with fall comes the stink bug. It is invading local homes in unusual numbers, looking for a cozy crack or cranny nook to spend the winter. Say this for the stink bug, though: At least it’s not a threat to humans.

The bug it is certainly an unwelcome house guest. 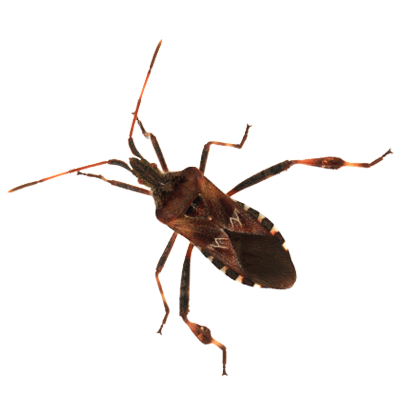 The stink bug is a brownish, spindly legged bug with a shield-shaped body, about three quarters of an inch long. When threatened or squished, it emits an odor that has been compared to the smell of sweaty socks — or cilantro.
The bug has been chewing its way across the United States and is now documented to exist in most states, including Massachusetts. Its domain is steadily spreading, as recent reports from Derry, N.H.
The most common advice for keeping the pests at bay is to seal cracks around doors and windows and repair or replace damaged screens.

There are several varieties of the bug.
One is the brown marmorated (for its marbleized shell). A native of the Far East, it has been in the United States for at least 15 years. It has since been found in more than 30 states, including New Hampshire and Massachusetts. This variety is especially damaging to crops — it will eat anything that fruits.

But University of New Hampshire entomologist Alan Eaton believes the culprit in this region is more likely another variety of stink bug, the Western conifer seed bug, which feasts on the seeds of fir and pine trees.

A native of the West Coast, the bug has moved east and even made the jump to Europe as an invasive species. It was first documented in New Hampshire in 1997, about the same time the other variety was identified in Pennsylvania.

Eaton said this has been a bad year for the bug — or a good one, from their point of view — but he’s not sure why.

One factor may have been the unusually mild winter of 2011-12, followed by the early spring. The milder weather is easier on the bugs, as it is on us, and may have allowed more of the insects to survive and to reproduce multiple times.
We’ll take another mild winter at the risk of another bad year for bugs and hope that the boom year will be followed by a bust, as often happens in nature’s cycle.