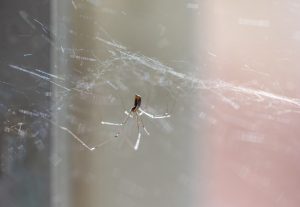 Cellar spiders construct loose, irregular webs in areas with higher relative humidity and moisture, such as homes, sheds, barns and warehouses. Within these structures, cellar spider webs are usually found in dark and damp places, including but not limited to the corners of eaves, windows and ceilings in cellars, basements, crawlspaces and garages. In commercial buildings, cellar spiders tend to spin webs in corners near doors that are left open.

Cellar spiders prefer to hang upside down in their webs as they wait for prey, which typically consists of other spiders and insects. When bothered, a cellar spider will repeatedly pulse its body to make its entire web shake. These pulsations help to entrap any insects that have approached the web and become the spider’s next meal.

Unlike species that expend their webs and then make new ones, or clean their webs to reuse them, cellar spiders will continue to layer additional, new webs on top of their old ones. As a result, the webs can build up in excessive volume in a somewhat short period of time, creating a noticeable cobweb appearance in the home or building.

Female long-bodied cellar spiders may produce up to three egg sacs each containing 13-60 eggs throughout the course of their life. The sacs are created from a thin layer of silk that is see-through. The cluster of eggs gives the sac the appearance of an unripe blackberry. The females then carry the egg sacs around with them in their mouths until the eggs hatch, as opposed to resting them in their web like other spider species do. Female short-bodies cellar spiders produce a similar egg sac containing 10-27 eggs each that they also carry in their jaws. The emerging spiderlings often cling to their mother for a short time. There are five molts before the spiderlings reach full maturity – a process that takes one full year. Adult long-bodied cellar spiders usually live for about two years.