Carpenter ants get their name from their nest building 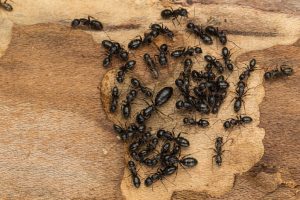 Carpenter ants get their name from their nest building, where they will excavate the wood and form smooth tunnels inside of the wood. Carpenter ants do not eat wood, they only tunnel and chew through wood to create nests.

The western black carpenter ant colony, when mature, contains about 10-20,000 workers, with large colonies of more than 50,000 individuals. There is usually only one functional, wingless queen per colony. Swarmers are not produced until the colony is more than two years old. They are produced in the previous year and held over the winter in the nest for release the following year. Swarmers appear from May until August in the eastern United States and from February through June in the west.