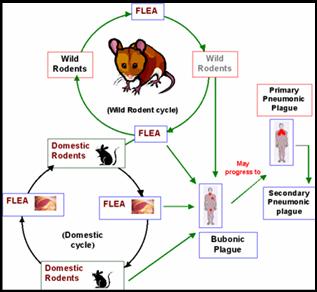 The parents of 7-year-old Sierra Jane Downing thought she had the flu when she felt sick days after camping in southwest Colorado. It wasn’t until she had a seizure that her father knew something was seriously wrong and rushed her to a hospital in their town of Pagosa Springs. She had a 107-degree fever, and doctors were baffled by the cause. “I didn’t know what was going on. I just reacted,” Sean Downing said. “I thought she died.”
The Downings eventually learned their daughter was ill with one of the last things they would’ve thought: bubonic plague, a disease that wiped out one-third of Europe in the 14th century but is now exceedingly rare — it hasn’t been confirmed in Colorado since 2006 — and treatable if caught early.  Federal health officials say they are aware of two other confirmed and one probable case of plague in the U.S. so far this year — an average year. The other confirmed cases were in New Mexico and Oregon, and the probable case also was in Oregon. None were fatal.
Plague is generally transmitted to humans through the bites of infected fleas but also can be transmitted by direct contact with infected animals, including rodents, rabbits and pets.

Officials with the Centers for Disease Control and Prevention acknowledged that a series of frightening illnesses linked to insects and pests have been surfacing lately across the country, including mosquito-borne West Nile virus outbreaks in Texas and other states, deadly hantavirus cases linked to Yosemite National Park, and some scattered plague cases. But with some of the illnesses — like plague — this is not an unusually bad year; it’s just getting attention. And the number of cases of each disease is driven by different factors.
“I don’t think there’s a confluence of any particular set of factors” driving the recent illness reports, said Kiersten Kugeler, a CDC epidemiologist in Colorado who tracks plague reports.
In Sierra Jane’s case, a Pagosa Springs emergency room doctor who saw her late on Aug. 24 called other hospitals, some of whom thought she’d be fine the next day, before the girl was flown to Denver, Sean Downing said.
There, a pediatric doctor at Rocky Mountain Hospital for Children racing to save Sierra Jane’s life got the first inkling that she had bubonic plague. Dr. Jennifer Snow suspected the disease based on the girl’s symptoms, a history of where she’d been, and an online journal’s article on a teen with similar symptoms.
Dr. Wendi Drummond, a pediatric infectious disease specialist at the hospital, agreed and ordered a specific antibiotic for Sierra Jane while tests were run, later confirming their rare diagnosis.
It was the first bubonic plague case Snow and her colleagues had seen.
“I credit them for thinking outside the box,” said Dr. Tracy Butler, medical director of the hospital’s pediatric intensive unit.
It’s not clear why Colorado hasn’t seen another human case until now, state public health veterinarian Elisabeth Lawaczeck said.
By the night of Aug. 25, Sierra Jane’s heart rate was high, her blood pressure was low, and a swollen lymph node in her left groin was so painful it hurt to undergo the ultrasound that detected the enlarged node, Snow said.
Doctors say the girl could be discharged from the hospital within a week.
On Wednesday, Sierra Jane flashed a smile with two dimples as she faced reporters in a wheelchair, her pink-toed socks peeking out from the white blanket enveloping her as she held a brown teddy bear.
“She’s just a fighter,” said her mother, Darcy Downing.
Darcy Downing said her daughter may have been infected by insects near a dead squirrel she wanted to bury at their campground on U.S. Forest Service land, even though Darcy had warned her daughter to leave it alone. She remembered catching her daughter near the squirrel with her sweat shirt on the ground. Her daughter later had the shirt tied around her torso, where doctors spotted insect bites.
The bubonic plague, or Black Death, killed an estimated 25 million people in Europe in the Middle Ages. Today, it can be treated with antibiotics, but it’s important to catch it early.
“If she had stayed home, she could’ve easily died within 24 to 48 hours from the shock of infection,” Snow said.
http://www.foxnews.com/health/2012/09/05/colorado-girl-recovering-from-bubonic-plague/#ixzz25ngBPBCA