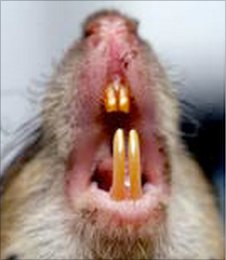 The local farmers call it a flood; an inundation that happens every 50 years.
Others believe it to be an act of God, an inevitability.
It isn’t water flooding the precious farmland in north-eastern India, but rats.
A once in a generation, gigantic plague of rats, that ruins crops and leaves people starving.
A rat army so big, so mythical, that until now some scientists did not believe it was real.
This explosion in the rodent population, leading to swarms of hungry pests, is caused by a glut in the food supply, namely bamboo seeds, researchers have confirmed.
And it is a perfect example of how the simple relationship between two apparently innocuous species, a tall grass and a tiny rodent, can turn the ecology of a whole region upside down: wiping out wildlife, destroying agriculture and leaving people destitute.
Worse, scientists suspect that climate change may create even bigger rat armies in the future.
Bamboo carpet

Bamboo forest covers more than 26,000 square kilometres throughout the north-eastern state of Mizoram, extending into the Chin Hills of Burma and the Chittagong Hill Tracts of Bangladesh.
This species of bamboo (Melcocanna baccifera) is invaluable for farmers whose entire livelihood is based on what they can grow.
It provides a building material, clothing and even food – in the form of bamboo shoots.
Ecologically though, it is an aggressive plant that has annihilated its competition, and carpeted the area.
Approximately every 50 years, though, that carpet of forest dies off.
Whatever the environmental conditions, an internal clock signals to each plant that it is time to flower, set seed and die.

“It’s a way for the bamboo to ensure that the seeds survive,” explains Steve Belmain, an ecologist from Greenwich University in London.
“But when the bamboo seed falls – you end up with 80 tonnes of seed per hectare on the ground.
“That’s 80 tonnes of food just lying there waiting to be eaten.”
For Dr Belmain and his colleagues, the most recent bamboo flowering, which began in 2004 and will continue to 2011, provided a unique opportunity to study an event that only occurs every half century.
“Before this, all we had was anecdotes from 50 years ago,” he told BBC News.
“It had become a legend – many people who live in the area now weren’t alive during the last outbreak.”
‘Rat armies’
It is only now that scientists have accepted that the “bamboo masting” is the trigger for the outbreaks.
The infrequency and scale of the event rendered it somewhat mythical.
“The many fantastic stories make it much harder for scientists to take it seriously and separate fact from fiction,” says Dr Belmain.
When his colleagues interviewed the communities in the Hill Tracts, some people talked about “rat armies” that appear to work together.
And many believed the rat plagues to be an act of God.

The big problem for local farmers is that their low-growing rice crops make easy pickings for the voracious pests.
Dr Belmain says that, when the rats come, some people simply do not bother planting crops. They just accept that it is pointless.
He and his colleague Grant Singleton from the International Rice Research Institute in Manila, Philippines, have just compiled and edited a new book, Rodent outbreaks – Ecology and impacts.
The book brings together the findings of teams of scientists working in the region, studying the local ecology and agricultural practices.
On top of widespread starvation, Dr Singleton tells BBC News, that the rat floods turn the whole forest ecology “upside down”.
“There is a huge impact on insects and other wildlife too – habitats and food are simply wiped out,” he says.
Pest apathy
But, despite the fact that the locals see their crops ravaged, there is little to no drive to do anything about it.
The scientists say there is an overwhelming feeling of apathy in the region.
And in the lowlands of Burma, cyclone Nargis – an event that itself killed an estimated 140,000 people – actually made the problem even worse.

Dr Singleton explains: “Because the cyclone was so intense and so much life was lost, there were a lot of areas abandoned that would normally be cropped.
“And these areas became overgrown with grasses and weeds that were a major breeding ground for the rodents.
“Also smallholder farmers recovered from the cyclone at different stages, leading to the crops being planted at markedly different times.
“Therefore the rice crops matured at different times and provided food on the table of the rat for much longer than usual.”
All of this led to the rats breeding for longer and to their young maturing and breeding before the cropping season ended. The result: another explosion in the rat population.
There was anecdotal evidence that the cyclone also wiped out predators, including snakes, that would otherwise have preyed on the rats.
This, along with abandoned land and fewer humans to catch the rodents, left them with little control over their numbers.
Between June and September 2009, community rat collection campaigns conducted in just a few townships in the Ayeyarwaddy Delta collected more than 2.6 million rats.
Dr Belmain says the huge number of rodents was related to the cyclone. 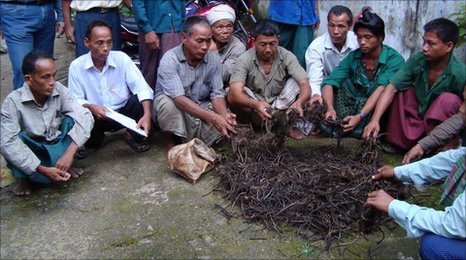 “Outbreaks of this magnitude have not been recorded in the previous 30 years in this delta,” he tells BBC News.
The scientists believe that outbreaks of rodent and other crop pest populations following extreme weather events [are] likely to become more common with the onset of climate change.
Unusual pests
Not just one rodent species involved, but one of the main culprits in the Ayeyarwaddy Delta is Bandicota savilei.
This common rat is a native species, rather than an invasive predator that has found itself in a new environment with no strong competition.
It seems though that the ecological landscape is so warped by the bamboo masting that this has become a native species gone bad.
The rats can produce a litter every three weeks and the baby rats reach sexual maturity in just 50-60 days.

For the scientists, it is a frustrating problem, because the solutions are relatively straightforward.
Dr Belmain says: “Most of the methods used for pest control are not working at all.”
“In India, individual farmers often buy a handful of poison at the market and spread it around.”
One solution could be a simple plastic sheeting fence – containing holes that lead into rat traps.
So Dr Belmain and his colleagues hope to reach local farmers and teach them that by laying efficient traps at the right times, they could reduce the amount of food they lose.
Dr Belmain says: They’re either engrained in apathy because they’ve tried and failed to control it or they don’t appreciate how much they’re losing to rats.
“So you really have to hold their hands and show them their lives can be better.
“People can do a lot more if they’re organised.”
Preparation, it seems, will be key to facing the next rat army.