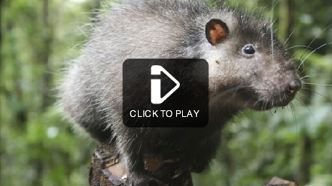 This is typically the time of year that rodents move inside. We can help. In the meantime, for your consideration, we present his article, on the world’s largest rat, culled from our BBC Rodent Dispatches.

A new species of giant rat has been discovered deep in the jungle of Papua New Guinea.
The rat, which has no fear of humans, measures 82cm long, placing it among the largest species of rat known anywhere in the world.
The creature, which has not yet been formally described, was discovered by an expedition team filming the BBC programme Lost Land of the Volcano.
It is one of a number of exotic animals found by the expedition team.
Like the other exotic species, the rat is believed to live within the Mount Bosavi crater, and nowhere else.
“This is one of the world’s largest rats. It is a true rat, the same kind you find in the city sewers,” says Dr Kristofer Helgen, a mammalogist based at the Smithsonian National Museum of Natural History who accompanied the BBC expedition team.
Very few people – even the Kasua tribe – venture inside the crater
Initially, the giant rat was first captured on film by an infrared camera trap, which BBC wildlife cameraman Gordon Buchanan set up in the forest on the slopes of the volcano.
The expedition team from the BBC Natural History Unit recorded the rat rummaging around on the forest floor, and were awed by its size.
Immediately, they suspected it could be a species never before recorded by science, but they needed to see a live animal to be sure.
Then trackers accompanying the team managed to trap a live specimen.
“I had a cat and it was about the same size as this rat,” says Buchanan.
The trapped rat measured 82cm in length from its nose to its tail, and weighed approximately 1.5kg.
It had a silver-brown coat of thick long fur, which the scientists who examined it believe may help it survive the wet and cold conditions that can occur within the high volcano crater. The location where the rat was discovered lies at an elevation of over 1,000m.
Initial investigations suggest the rat belongs to the genus Mallomys, which contains a handful of other out-sized species.
It has provisionally been called the Bosavi woolly rat, while its scientific name has yet to be agreed.
By Matt Walker
Editor, BBC Earth News