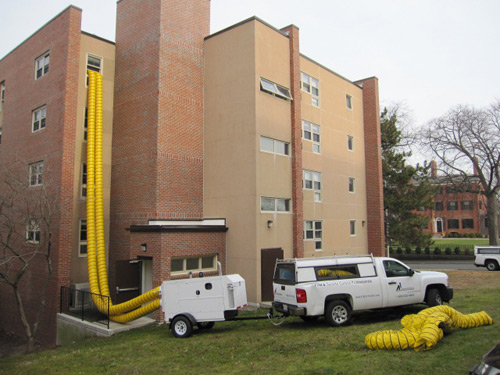 By Ira Kantor
www.bostonherald.com
Exterminators will begin turning up the heat on a bedbug  infestation at two Salem elderly housing complexes tomorrow,  days after a specially trained beagle found the bloodsucking pests living in 38 out of 89 units, housing officials said.
“Those 38 units are now in the pipeline for extermination using the heat method,” said Salem Housing Authority Executive Director Carol MacGown.
A1 Exterminators of Lynn will heat alerted units at Philip L. Morency Manor and the James A. Dalton Residence on Bridge Street to 125 degrees to kill the creepy crawlers and their eggs. “Nobody will be displaced. All we ask is the residents cooperate in assisting us in preparing the unit for extermination,” MacGown added.
A1, called in to investigate Friday by housing officials, brought in Tracer, a beagle belonging to American K-9 Private Investigators of Mattapoisett, to sniff out the pesky varmints. Going through all units and the common areas of both buildings, Tracer tracked the bugs by scratching furniture, said A1 president Gary Weisberg.
“It’s unbelievable. You put a dog in one of those units and they will immediately go right to that area,” Weisberg said. “They’re on the scent.”
Affected tenants must leave their homes for eight hours because of the excessive heat, MacGown said.
Turning up the heat is “lethal to all stages of bedbug development,” Weisberg said.