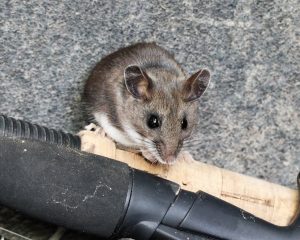 The deer mouse (Peromyscus maniculatus ) is a small, native rodent in the family Muridae with an almost ubiquitous distribution in North America. The deer mouse ranges from the subarctic boreal forest, through wide areas of more southern conifer and mixed-wood forests, to drier habitats as far south as some regions of Mexico.

The deer mouse is highly variable in size and color over its range. Its body length ranges 2.8–3.9 in (7–10 cm), the tail 2–5.1 in (5–13 cm), and the body weight 0.6–1.2 oz (18–35 g). Many geographic variants of the deer mouse have been described as subspecies. The color of the deer mouse ranges from grayish to reddish brown, with the body being dark above and white beneath. The bicolored coat of these mice gives rise to its common name, a reference to a superficial resemblance to the coloration of white-tailed and mule deer (Odocoileus spp.). The deer mouse can be difficult to distinguish from some closely related species, such as the white-footed mouse (P. leucopus ), another widely distributed, but more eastern species.

The deer mouse occurs in a very wide range of habitat types. This species occurs in deserts, prairies, and forests, but not in wetlands. The deer mouse is quite tolerant of certain types of disturbance, and its populations are little affected by light wildfires or the harvesting of trees from its habitat.

The deer mouse nests in burrows dug in the ground, or in stumps or rotting logs. This species also sometimes nests in buildings. Deer mice can climb well, and they do so regularly in certain habitats. The deer mouse is a nocturnal feeder on a wide range of nuts and seeds, and when this sort of food is abundant it is stored for leaner times, because deer mice are active all winter. Deer mice also feed on insects when they are available.