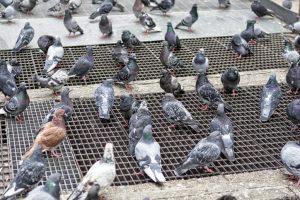 Common pigeons are native to Europe, North Africa, and western Asia. They’ve been domesticated for thousands of years, and have served as message carriers, food sources, research subjects, and pets. With such a longstanding relationship between people and pigeons, it’s unsurprising that European colonists brought these birds with them to North America in the early 1600s. Some escaped into the wild, and the rest is history: they soon spread across the country. Wild pigeons naturally nest on cliffs or in caves, and their feral cousins readily inhabit ledges on buildings.

There’s no difference between doves and pigeons, scientifically speaking. All belong to the family Columbidae. In fact, common pigeons are also known as rock doves. They have plump bodies, short legs, and thin, relatively short beaks. Their tails are fan-shaped and their wings are pointed.

Through selective breeding, people have developed domestic pigeon varieties with many interesting patterns and colors, much like domestic dog or horse breeds. This is why the descendants of these birds, the feral pigeons, can be found in many shades of brown, gray, black, and white. However, most flocks contain individuals with the typical wild “blue” form: a blue-gray body, lighter blue-gray wings marked by two black bands, a wide black tail band, and a white rump. The neck often shimmers with purple and green iridescent feathers.

One other member of the Columbidae family breeds in Massachusetts: the mourning dove. This slimmer, tan-colored bird has a pointed tail and is native to the area. Learn more about mourning doves

Pigeons are flocking birds, and they are among the strongest and swiftest of avian fliers. Their flight muscles make up about one-third of the total body weight. Some birds are raised for racing; they may fly more than 500 miles in a single day and have been clocked at speeds in excess of 94 miles per hour.

An unusual feature of pigeons is their ability to drink by sucking fluid in through their bills, rather than by tilting their heads back to swallow like most birds. Watch for this behavior when you see pigeons drinking from a puddle.

Common pigeons are monogamous, and pairs stay together throughout their lives. They may breed at any time of the year as long as there’s enough food. Wild pigeons nest on cliff ledges or in caves, so feral pigeons seek their urban equivalents: building ledges, rafters, and niches beneath bridges and overpasses.

Females typically lay two whitish eggs. Both the male and female care for the young. For the first four or five days after hatching, the parents feed their nestlings “pigeon milk”. This secretion, which is produced by a part of the digestive system called the crop, is rich in fat, protein, and vitamins, much like mammals’ milk.

Four to six weeks after hatching, young pigeons are semi-independent. At this point the adults may start another brood.

Pigeons mostly eat seeds, but they will also consume berries, vegetation, and the occasional small creature such as an insect. City pigeons eat a varied diet. They thrive on the weed seeds in vacant lots, and, unfortunately, on grass seeds in newly sown lawns. They also eat spillage from bird feeders, handouts from people, and food waste.