Life Cycle of a Squirrel 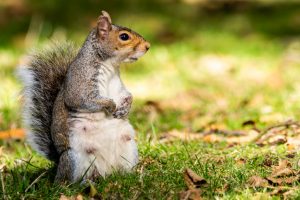 It takes about 40 to 44 days for the gestation period of female squirrels with one to nine babies born into the leafy den, which is usually a hollow in a tree. At birth, squirrel babies – neonates – are born hairless and blind, and it takes them between 28 to 35 days before they open their eyes. They begin to leave the nest at between 42 and 49 days, but the mother doesn’t ween them until they reach 56 to 70 days old, when they go out on their own. Squirrels born in the late summer may stay with the mother over the winter. Females and males mate in the spring or summer following their birth.

Disease, cataracts, parasites, tooth loss and other debilitating events impact the life expectancy of a squirrel so that as they age and slow down, their ability to survive decreases. Squirrel lifespan averages anywhere from 6 to 12 years in the wild, if they’re lucky, and up to 20 years in captivity. The strong do survive, and adapt, especially in urban areas, where squirrels often use utility wires as a means of getting about. Squirrel predators include several animals: rattlesnakes, weasels, black snakes, skunks and foxes, but their biggest threat comes from above from hawks and owls.