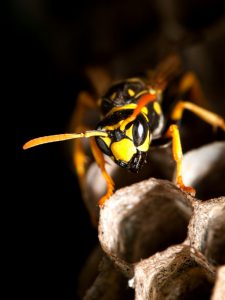 Yellow jackets often nest underground in rodent burrows, so if you see lots of flying insects emerging from a hole in the ground, they’re probably yellow jackets. By late summer early fall, a colony may contain thousands of individuals that will aggressively defend their nests from intruders. They’re easily provoked and will attack in force, chasing the perceived threat for large distances. What’s worse, each yellow jacket can sting multiple times. Sounds and vibrations, such as those from a mower or trimmer, can trigger an attack, even from a distance.