What is a Paper Wasp 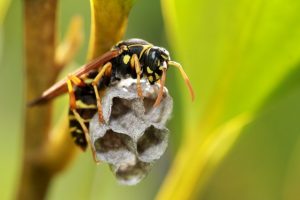 Paper wasps get their common name from the paper-like material out of which they make their nests. Paper wasps are sometimes called umbrella wasps, after the shape of their distinctive nests.

Paper wasps are a group of several species of vespid wasp. These stinging insects are semi-social creatures, as they typically live in small colonies but do not have a worker caste. There are about 22 known paper wasp species in North America, and hundreds in the world. Some additional species of this type of insect include the annularis paper wasp, apache paper wasp, dominulus paper wasp, dorsalis paper wasp and golden paper wasp. Similar groups to paper wasps include yellowjackets and hornets, potter and mason wasps, spider wasps and long waisted paper wasps.