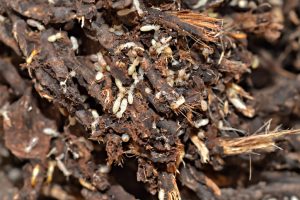 There are three distinct types, or castes, of subterranean termites with physical differences, including reproductives, workers and soldiers.

The reproductives include the king, queen and alates. Integral to a colony’s growth, the queen is the largest termite while the king is much smaller. Alates, also known as swarmers, have long, dark brown to almost black bodies and translucent, slightly milky-colored wings. Their bodies typically measure about ¼ to ½ inch in length and their wings may have a few barely visible hairs. Unlike swarmers, workers and soldiers do not have wings. Workers are about ¼ inch or less in length are have cream colored bodies. They have small jaws that help them chew away at wood and move materials. Soldiers can be distinguished by their large mandibles. They have rectangular shaped heads and their bodies are flat and wide. Although their body is usually a creamy white color, similar to workers, their head is darker and more brownish in color.