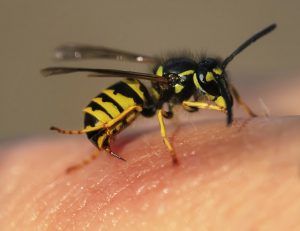 Wasp and hornet stings are a serious threat to public health. Allergic reactions to these venomous insects account for about 225,000 emergency room visits and as many as 100 deaths per year in the U.S. (a mortality rate that may be under-reported due to deaths mistakenly attributed to heart attacks or other causes). Paper wasps, hornets and yellow jackets are more dangerous and unpredictable than honeybees. When these insects are foraging for resources they are seldom aggressive. But when the nest is threatened the colony may launch a coordinated assault on the perceived threat. The attack is facilitated by the release of alarm pheromones, which attract other colony defenders to the intruder.

Elimination of wasp and hornet nests should be performed with great care. ‘Folk’ remedies such as dousing nests with gasoline or a garden hose are seldom successful and can result in multiple stings.