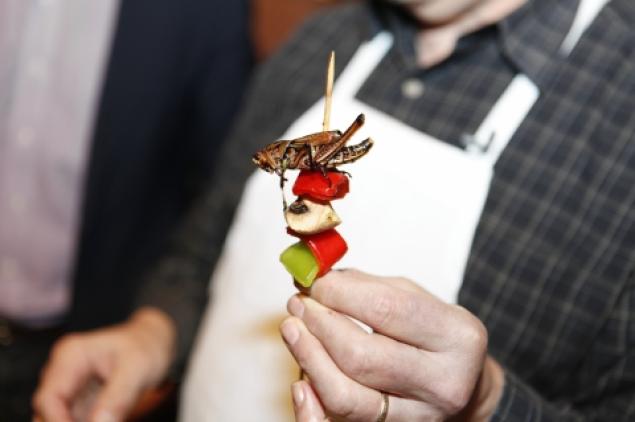 If the upcoming holiday season isn’t enough to bug me out, then a cooking session with “The Bug Chef,” David George Gordon, will certainly do the trick.
Author of the seminal “Eat-a-Bug Cookbook,” Gordon is in town to serve up his favorite insect-inspired Thanksgiving recipes this weekend at Ripley’s Believe It or Not! Times Square.
But first, the 62-year-old Seattle native, dressed in his signature chef’s hat with antennae, has offered to cook for me. On the menu is his favorite insect dish: skewered giant grasshoppers with mushrooms and peppers.
Actually, it’s his second favorite dish.
“I really like wax worms, but they are hard to travel with,” says Gordon, who estimates that bugs compose 10% of his diet. “They are little white caterpillars that feed on the wax in a beehive and taste sweet, like pistachio nuts.”
I like pistachios!
But I don’t like my food staring back at me like the recently-thawed giant grasshoppers. Each is at least two inches long, marinating in a bowl of lemon juice, olive oil, honey, ginger and mustard.
“Don’t worry,” says Gordon, sensing my trepidation. “These big guys have a lot of crunch to them and they will taste just like the marinade. Did you know that 80% of the world’s cultures eat insects?”
I did not.
I also did not know how hard it is to skewer a grasshopper. As I quickly learned, you must find the cracks in the insect’s exoskeleton, and then push hard until the skewer and an inky black substance emerge from the other side.
Yummy!
Once we’ve created our vegetable-grasshopper kabobs, Gordon tosses them on a hot plate for two minutes per side, while he liberally covers them in fresh-squeezed lemon juice.
Finally, it is time to eat. Gordon breaks off a back leg and sucks out the meat. I follow suit, but can’t taste much other than lemon zest.
“Try the head,” Gordon suggests. “Bite and then suck out the insides.”
And so I do, albeit with my eyes closed. The grasshopper head is crunchy while the insides are almost creamy. It’s not delicious, but it is certainly not disgusting either.
“They say if we raised grasshoppers and other insects instead of cattle,” Gordon says, “we’d be using a lot less resources and also cutting down on our greenhouse gas emissions by as much as 60%.”
That might be true, I think as I suck the last of the grasshopper guts into my mouth, but I’d sure miss steak.
Read more: http://www.nydailynews.com/life-style/eats/bug-chef-grills-grasshoppers-news-reporter-article-1.1202858#ixzz2CQJoDv9t
Previous/Next
Tagged with: bug chef, eat a bug, edible bugs, food